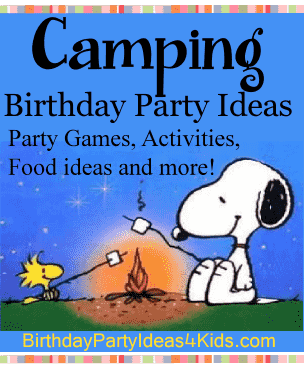 This theme and the games and activities can be used while camping in the forest, backyard or even inside.

We've also included a free Nature Scavenger Hunt List for a fun and educational game while the kid's are exploring the outdoors.

Print out party information on large labels and stick to one side of big chocolate bars.  On the other side print out a label that says " ________'s (child's name) camping party will be Smore fun with you there!"

Print out the camping sign below and attach to blank note cards.  Inside write the party information and then send to guests.

Camping Party Decorations
Decorate the party in greens and browns.

Print out several types of animal tracks from the computer and then cut them out and tape them to the driveway or walkway to the party.

Print out some of the camping symbol signs (below) and place them along the path to the entrance of the party and to designate areas of the camping party.

If the party will be inside or under a covered area hang strings of lights around the ceiling to look like stars.

Tree balloons can be made by taping brown tissue paper in the shape of tree trunks on the walls and then attaching 3 colors of green balloons above it for leaves.

Hang glow in the dark stars from the ceiling.

Set out tin cups with each campers name written in permanent marker at each place setting along with compasses, flashlights and/or binoculars.

For a fake campfire pile logs on top of a battery powered lantern or paint the underside of pieces of wood orange and then stack on top of red and orange strings of small Christmas lights.

Set up tents outside (or inside!) for the kids to sleep and play around.  If you don't have tents you can make your own by stringing rope between two trees or posts and hanging a waterproof tarp over the rope.

Spread out the sides of the tarp and secure to the ground.

Use these symbols that are seen at camping sites to designate different areas of the camping party.

Flashlight Hide and Seek
This game is best when played at night.  The person who is "it" will need a flashlight.  The person with the flashlight counts to 100 while the rest of the players hide outside.  The player with the flashlight searches for the hidden players and when one is found they shine the flashlight on them and call out the players name.  After this place in the game there are several variations:
1.  "It" gives the flashlight to the person that was found and they are the new "it".
2.  When found the players stay in a designated area (like a jail) until the round is over or they can be let out of the area if they are tagged by another player without getting caught.
3.  "It" gives out flashlights to the ones found and they help find the others that are hiding.
The first person found is "it" during  the next round.

Candy Treasure Hunt
Before the party hide lots of wrapped candies all over the backyard or area where the party is being held.  When it gets dark give each child a flashlight and tell them to search for the hidden candy.  Provide sacks or bags for the kids to hold their treasure.

Fishing Game
Fun for an inside Camping party.  Campers will fish for candy and toys from a pond that you make from a large box (you can also use a cardboard table with a sheet over it ... anything as long as the fishermen can't see what is in the water.   Buy lots of wrapped candy and small Camping themed toys for the fish to give out.   The fishermen put their fishing line (tie a string to one end of a bamboo pole or stick and a clothespin to the other end of the string) over into the water.  The "fish" then place a prize on the clothespin and tug the line.  The fishermen pull up the line with the toy or candy attached.

What you need for the game:
Large or small group
Large area to run

Played similar to the game of Rock, Paper, Scissors with tag thrown in for fun.

On playing field – make 2 end zones at each end as a safe space for each team. In the middle of the field set up orange cones or a line of tape.

Teams gather together in their designated end zones and decide on which sign they will do during that round of play.
Then both teams line up at the center line across from each other.

The announcer calls “Bear, Fish, Mosquito … Go!” and together each team performs their sign. (For fun the teams can make their signs large with their bodies or come together as a group to make the sign.)

Campfire
Before the party have an adult create a campfire.  Bring out chairs or large logs for seating and place them at a safe distance around the fire.  and roast marshmallows
and hot dogs.

Decorate t-shirts
Decorate camouflage or plain t-shirts.  Let the kids decorate with fabric paint and fabric paint pens.  Or have shirts already printed with their names and they can embellish with rhinestones or paint pens.

Smore's - chocolate squares, graham crackers and large marshmallows
Steamy cups of Hot Chocolate
Fire roasted Hot dogs
Roasted Marshmallows - before the party find lots of long skinny tree branches that can be used for roasting the marshmallows and hotdogs
Teddy Grahams
Bug Juice - there's sure to be bugs when you are camping ... but these are the delicious kind!  The day before the party fill ice cube trays with water and a few raisins in each ice cube.  The raisins look like bugs when frozen inside the ice cubes.  Let the kids place them in their drinks and sodas at the party. 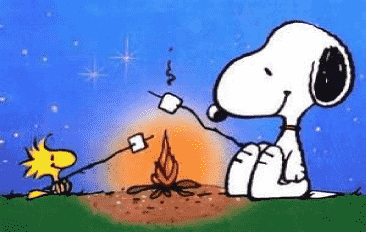