Fun party ideas for an Angry Bird party theme including ideas for:

On red (or yellow) note cards cut out the faces of the angry birds and paste to the front.  Embellish with a few red or yellow feathers.


Hang red, yellow and green helium balloons outside the party area.   Make a large pig structure with cardboard boxes outside the party venue - glue them together and make it big enough to be an arch that guests have to walk under to enter the party.

Decorate the party in Angry Bird colors  - red, yellow, black and touches of blue.   Use this great angry birds template we found (see link above) to make faces for regular or helium balloons.   Bring the pigs into the party by setting up one side of the party in greens and the other in angry birds colors.

Set up the party food table using red, black and yellow bowls on one side and green bowls on the other side.  On the green side of the food table use small cardboard boxes or pieces of wood to make a pig fortress and place the snack dishes inside and around the boxes.

Egg Toss
Divide party guests into teams of two.  Have each team stand about 3 feet apart and on "go" they toss the egg to their partner.  Then each team steps back a foot and they toss the egg back to their partner.  Keep going - backing up one step each round - until there is only one team with an unbroken egg.   *  You can also play this during the summer with water balloons instead of eggs.

Angry Bird Egg Hunt
Kids search for hidden plastic "Angry Bird Eggs" which are filled with candy or prizes.   Before the party fill plastic eggs with candy and/or small prizes.  Hide the eggs around the party area.  When it's time to play the game tell the guests that the Pigs have hidden the Birds eggs and they must search for them.  Let kids search and find the hidden eggs.   *For a twist you can hide eggs and have a few that contain red or yellow paper which the kids can turn in for a prize at the end.

** Variation - buy small prizes before the party and assign each prize a number.  Write down the numbers on separate pieces of paper and place inside the eggs before hiding them.  When the hunt is over the kids can turn in the prize numbers and receive the prize that is written on the papers they found in their eggs.

Angry Bird Draw Icebreaker Game
While the kids are arriving to the party set out pieces of paper and markers and let them try to draw the angry bird faces.

Have several examples that they can use to look at while drawing.

Hang up the drawings during the party and then send home with the kids when the party is finished.

Angry Bird Bowling
Paint or cover 10 - 2 liter bottles with green paint or construction paper.
Fill them about 1/4 the way full with water and replace the caps.
Set up the bottles in a pyramid shape and let the kids try to bowl the pins down from about 20 feet away using an angry bird ball (or a large red playground ball).

Capture the Egg
This game is played just like Capture the Flag - only the kids will try to capture the other teams eggs.

You will need: 2 large red or yellow eggs - or use a red bandana and yellow bandana.
Teams try to capture the other teams "egg" and return it to their home base.  Separate players into 2 teams. Determine boundaries and territory for each team - you can mark boundaries with yellow or red crepe paper or rope.

To make it easy one team can take the front yard and the other the back yard.  Teams must then decide where they want their eggs and jail to be located within their territory.  The eggs have to be in plain site and can not be moved.  Set up a safety zone around the eggs (a 5 - 10 foot circle).   The team guarding their eggs may not enter this circle unless the other team enters first.

How to play: Teams send part of their players into “enemy territory” to capture the eggs. The players left behind will guard their own eggs. If a player is tagged by the opposite team they go to their jail. To get out of the jail they must be tagged by one of their teammates.

Variations:
Spies and Lookouts  - When teams are deciding where their eggs will be spies can be sent out from the opposite team to see where the eggs are located - and look-outs can be sent out to catch the spies.

You can also buy a water balloon launcher for the kids to use as a slingshot with the balls.

On a smaller scale you could use red and yellow bean bags to topple over a pig hideout made from building blocks.

Angry Bird Activities
Buy or make a large green Pig piñata.  Fill with candy and then instead of having the guests hit it with a stick let them throw small balls or baseballs at the piñata.  Make sure everyone is in back of the person throwing the balls at the piñata.  Take turns starting with the youngest first so everyone gets a turn.

Angry Birds Party Food Ideas
Pigs in a Blanket
Pepperoni with yellow cheese cut into small triangle shapes
Pretzel sticks - set them up in a Y shape to look like slingshots
Small individual pizzas with round pepperoni and cheese triangles
Cupcakes with Angry Bird cupcake toppers (see link at the top of the page for a free printout)
Candy Buffet - set up one side with red / yellow candies and the other side with green candies.   For help with set up see our Candy Buffet Help page.

Goody / Loot Bag Ideas
Red and Yellow solid color paper sacks with the faces of the angry birds on the front.  See the free balloon printable at the top of the page for the template.
Red or yellow bandanas (wrap the party favors up in the bandanas and then tie)
Small red and yellow solid color buckets.
Super large plastic eggs - place the party favors inside.
Red or yellow cup. 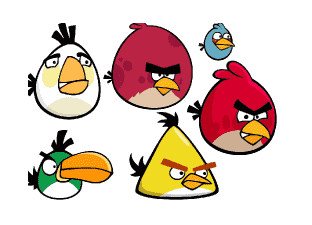