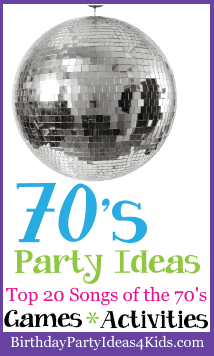 1970 birthday party ideas for kids, tweens - celebrate a birthday with a blast from the past!

70's Theme Party Decoration Ideas
Hang small disco mirror balls outside in the trees.  Shine a few flashlights on them to make them sparkle.

Cut out dance footprints from poster board and tape them down to the sidewalk and party entrance.

Make signs that have the names of the popular dances like the Bump, The Hustle, etc. and place them outside with the dance footprints.

Hang a beaded curtain that party guests will have to enter through at the party entrance.  You could also make a sign in bright colors that says "70's Ahead!" or "Time Travel - destination the 1970's ".

Print 1970's song titles and artists inside the smaller circle and hang on the walls. You could also make these as place mats for the party table.

Play the favorite songs from the 70's.

Make Pet Rocks
Pet rocks were big in the 1970's.  They were basically a medium size smooth rock that came in a small wooden crate filled with straw.  You could teach your pet rock tricks like sit, stay and play dead.

Dance, Dance Dance
Dancing was a big part of the 1970's.  Teach the party guests some of the most popular dances from the 70's.  (If you don't know the dances look them up on YouTube).  Some popular dances from the 70's are the: Hustle, Bump, Disco, Funky Chicken and YMCA.   You can also let them listen to some of the silly songs such as Kung Fu Fighting, The Streak and Convoy.

Slang shirts
Let the party guests decorate a t-shirt using permanent markers or highlighters (they show up great under black lights) with slang phrases from the 70's.

Some favorites are:
Can you dig it?, Don't be such a spaz, Dream On, In your face!, Chill, Get down, Boogie, Keep on truckin', To the max, Jive talkin', Boo Ya, Smokin', Dig it, Drag, Far out, Foxy, Funky, Groovy, Hip, Jive Turkey, Out of Sight, Peach, Radical, Stoked, Totally Awesome.  These sayings would be great on signs hung around the party room also.

Magazine Roll Up Necklaces
We made these all the time at parties in the 70's.  Easy instructions for the bead pattern can be found here on our website: Magazine roll up necklaces.

Karaoke
Set up a Karaoke area and let the party guests sing to some 1970's songs.

Set out some fun games from the 1970's such as:
Twister
Mousetrap
Mr. Microphone
Rock em Sock em Robots
Operation 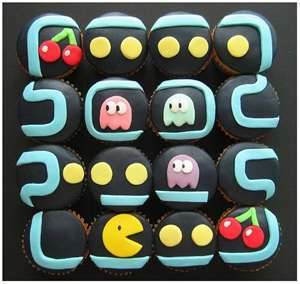