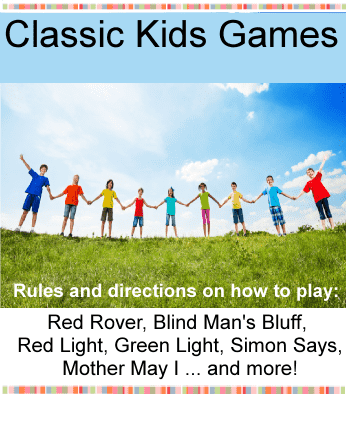 Fun verses and rhymes to decide who will be "IT" first

Button Button (Who's got the button?)
How to Play the Button Button Game and easy set up and instructions.  Great indoor party game for kids of all ages.

How to play the classic children's game of Follow the Leader where kids follow one player that is leading.  The leader does fun actions like jumping, twirling, skipping and the followers have to follow along doing the same actions.

Handkerchief Game is a good indoor party game for kids of all ages.  All you need to play is a handkerchief, bandana or a piece of cloth.  Easy to understand and set up.

Hopscotch is  a classic kids game that is played outdoors on a flat surface.  You will need sidewalk chalk to make the Hopscotch board and a pebble or bean bag for a marker.

Jacks Game
How to Play the Game of Jacks

Mother May I?
Players follow the commands of the "Mother" - the winner is the first one to reach the “mother”.   Choose who will be the "mother" first.  That player then stands on one end of a large playing field or room.  The other players line up side by side at the opposite end of the playing field.

The Mother one at a time calls a player and tells them to take a certain number of steps towards them.  The Mother also decides what kind of steps they will take.  For example they could have the player take 3 giant steps, 4 twirling steps, 2 marching steps, 5 baby steps ... and so on.

Before the players take their steps that they have been assigned they must ask "Mother May I?".

And then the mother answers "Yes, you may."   If they player forgets to ask "Mother May I?" then they have to go back to the starting line and begin again.

Red Light / Green Light game
Classic outside game!
Lay out two lengths of rope 25 feet apart to make the start and finish lines. The birthday child (who is now called the Police Officer) stands in front of the finish line while the others stand behind the start line.

The Police Officer turns his/her back on the other players and shouts, "Green Light!" and then turns around and counts to five.

Divide children into two teams and have them line up about 30 feet apart or more. Have each team tightly hold hands.

Each team calls out “Red Rover, Red Rover send ________ (children choose a name of a child from the opposite team) right over”.

The child that is called runs to the other team and tries to break through their joined hands. If the child breaks through then they take an opponent back to their side.

If they can’t break through they must join the other team.

Simon Says
Have children stand up in front of “Simon” (Usually an adult or older child). The children must do what Simon tells them to do … but only if they say “Simon says” first.

Fun and easy and Kids love it!

Tip: Think of about 25 commands before you start.

Here are some fun ones:
Jump up and down
Shake your head
Laugh out loud
Hop like a frog
Be a dog
Crawl like a snake
Stand on your head
Dance in place
Act like a chicken
Do jumping jacks
Pat your tummy
Summersault
Nod your head
March in place
Turn in circles
Move your arms and legs
Hop like a bunny
Stand still like a statue

Fun game that needs only a playground ball, a group of kids and a large playground, park or backyard to play.  SPUD is a Great outdoor game for kids of all ages.

How to play and score in the game of tether ball.  Also variations on game play. Tether Ball

Then the players have to take that many steps towards the Wolf.   7:00 would be 7 steps.  At anytime during the game the Wolf can answer "Supper Time!!" and with that they can turn around and try to tag as many kids as possible before they run back to their base where they started.

Whoever is tagged by the Wolf becomes a wolf and will line up on the Wolf side of the playing field.  All the wolves can tag players after the main wolf calls "supper time!".    The last person left untagged becomes the new Mr. Wolf and the game starts again.

How to Play Horseshoes